For some years in the 2000’s I painted using a pseudonym. Phillip Nangle the musician was also the artist James Wake. That way we didn’t get in each others hair.  So if you have a Wake painting  and you can’t explain why you like it so much and/or are unsure as to whether it has any value, rest assured; It is a Nangle! 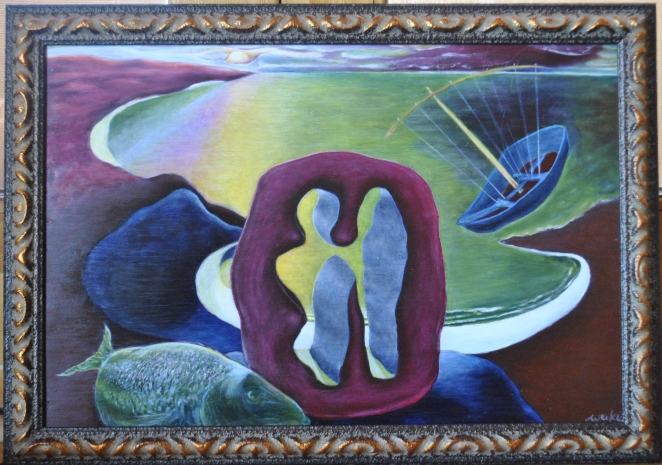 Painting “The Fisherman and his Wife” by Phillip Nangle. Oil on Wood 2007

“It’s not a sin, take off your skin, and dance around the moon.” (William Burroughs) 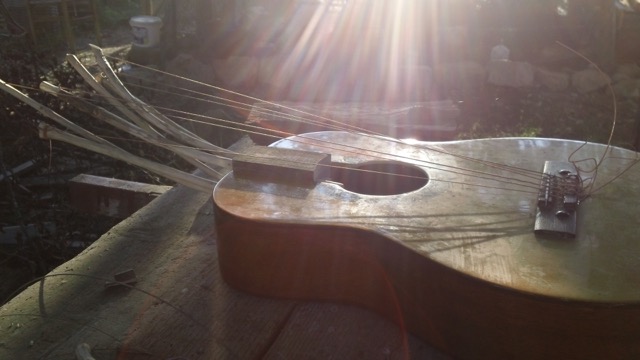 ..another hybrid from Phillip Nangle.. 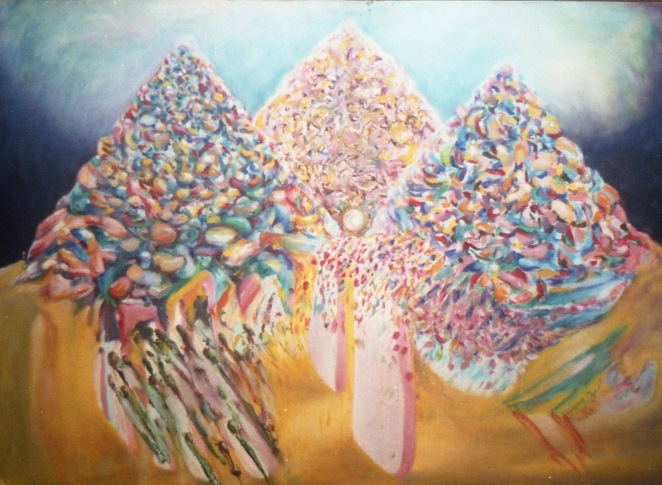 I sleep in a Cathedral in a bed from which I gaze with one uncovered eye into an infinite perspective. The poles that hold the structure of my room rise into the heavens and play tidily-winks with the shooting stars. Occasionally a bird, a pigeon or an eagle rests on a pole-top endangering my one opened eye in the pool of my room below. One of my ears is silenced by water and so half the world is obliterated. When the moon is bright my Cathedral glows and the silhouette of a horse moves elongated around the circular wall. The fire that warms me and keeps me company makes my home a glowing neon cone. All my actions and non-actions may be read from afar and from within by my shadow that is my halting of firelight reaching the circumference of the Cathedral. If I huddle close to the fire I appear a giant to passers-by. When I return to my bed the dream of my previous sleep awaits me on my pillow. I share my bed with mice, bugs, spiders, grasshoppers, ants and ticks. I have no fear for when the cobra may come in search of the mice because the cobra is only dangerous when cornered and my room being round has no corners. The fifteen poles that rise from the ground around me are lashed together in the distance above. At this point my Cathedral is dressed with a massive cloth with flowing lips of a mouth that can be opened wide or closed. In the morning a sunlit spear pierces it’s way through the opened mouth and stabs a bright shaft onto the inner wall of the Cathedral. At the moment chosen by time a mouse runs down my leg and high up above a fish-eagle cries. It is time to rise and leave the dreams embedded deep in my feather pillow for later recall.

Painting by Phillip Nangle  “The Journey” 2004 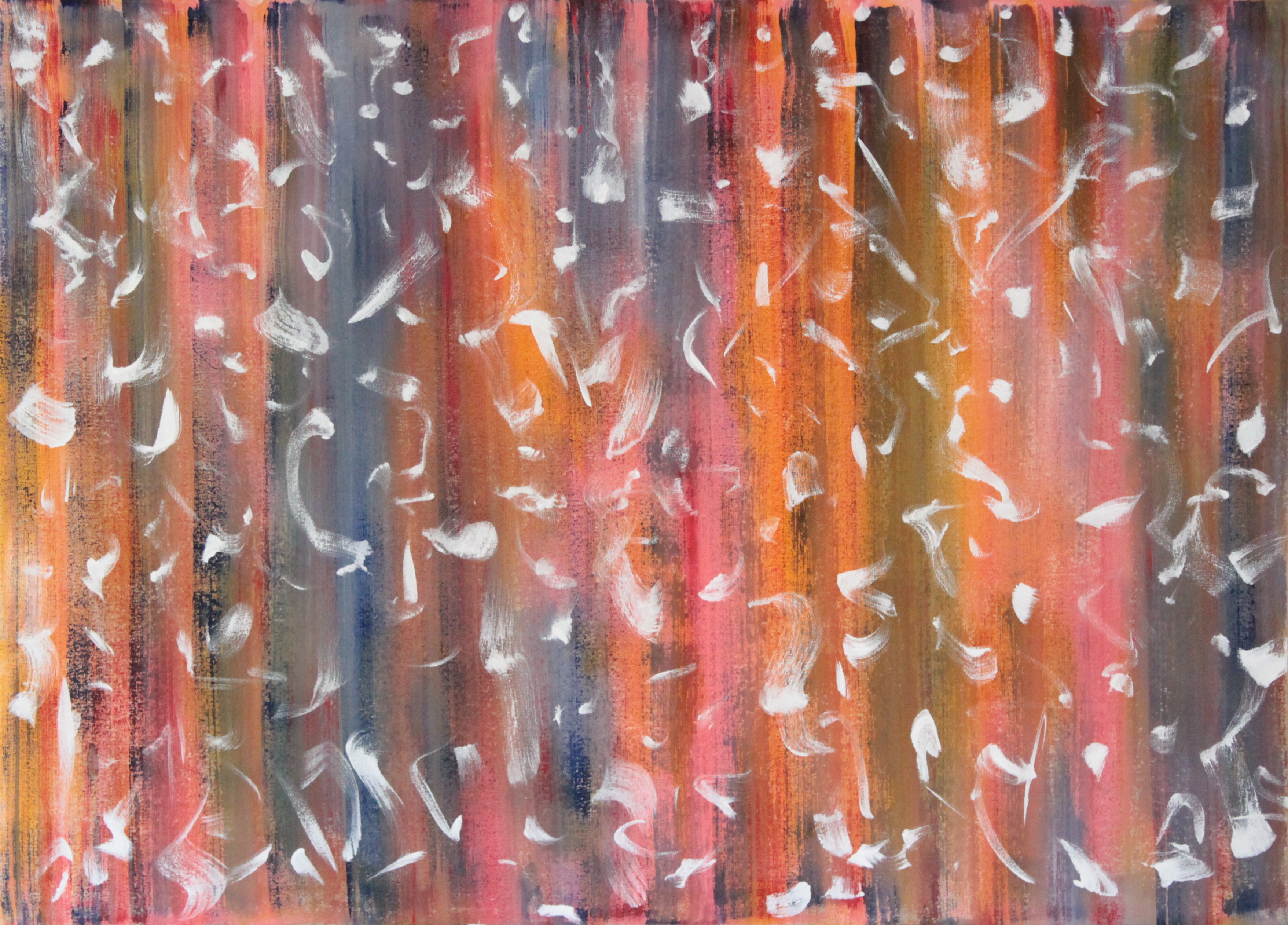 This is a marimba composition of mine that I have arranged and performed on karimbas. The painting was created during the process of working on the music.

The Congregation: Motley, sparse and rowing with oars attached to the pews which have been re-arranged into the shape of a sea vessel.

Gob. A female speaker with a gentle singing voice inside a large cardboard box.

To all of you and those like yourselves playing pot-luck with your fate, your circumstances dished out to you, unaware of your creative capacity and responsibility for your life: You have failed miserably to attain to the purpose of your existence which is to be co-creator with God in yourself and your environment around you!

Surely if God is almighty and consists of everything that exists then by making a resemblance in some form or other of all that we know to be, the essence of God will then speak to us in that form and we will be able to ask It questions thereby eliminating this recent discomfort of God unknown to us. It was soon after Kleilat Bamboo (a South African from Vioolsdrift) mastered the snowflakes creation program that the computer programmers exhausted the whole world’s possible programming phenomena in all its forms. These programs were assembled together on one divine and monumental occasion and since then the people of the earth have had once again thank Gob, direct access to God. Even though God presented Itself by an unusual name: “The Wirl Hold’s Gob,” people take this as near as dammit to mean: “The Whole World’s God.” The discrepancy they attribute to those still undiscovered perpetually mutating worms and frogs in certain impenetrable tropical rainforests whose textures and habits have yet to be programmed and added. Others are convinced it’s the earth’s core lava that is moving rather peculiarly. Either way Gob was accepted over time and with some alterations managed to prove Itself. Now old Father Hillander, the last practicing preacher, living in the remote hills of Ireland presents his final service because Gob has declared the end too nigh for another.

“You had it comin’ to yer! Yer a bunch of lazy sinners…Row!! Row yer boat into the lofty skies to yer place in the Heavens to rest with Isis and Osiris, row yer way through the Milky Way, join the Kings at Orion, go as a crowd no matter how tatty ‘n skimpish yer are..! Row! Row! This is yer last Sunday to rehearse! Aye! You had it comin’ to yer… the end is Nigh… let you know to row as ye pass to the other side for fear of the vessel slipping uncontrollably into Hell. Row now this last time to be sure you take the action with you when you go sailing through the skies. Send wine to all hands on board!”

Mother in congregation: (To her children)

“Have you done your homework?”  “Not yet Mommy.”

“Well you run along home and do your homework. You don’t want to arrive idiots in Heaven!”

“What does Gob say?”

“The Gates of Heaven have moved to the Entrance of Hell”

“Change rowing direction! This is where Anti-Karma kicks in. No more neighborly niceties and being good to one another! It’s plunder, plough asunder, pilfer, pinch, all the meanness you can muster to stand you in good stead as you enter Hell!  Row…, Rooow…, Rooooow!!!” 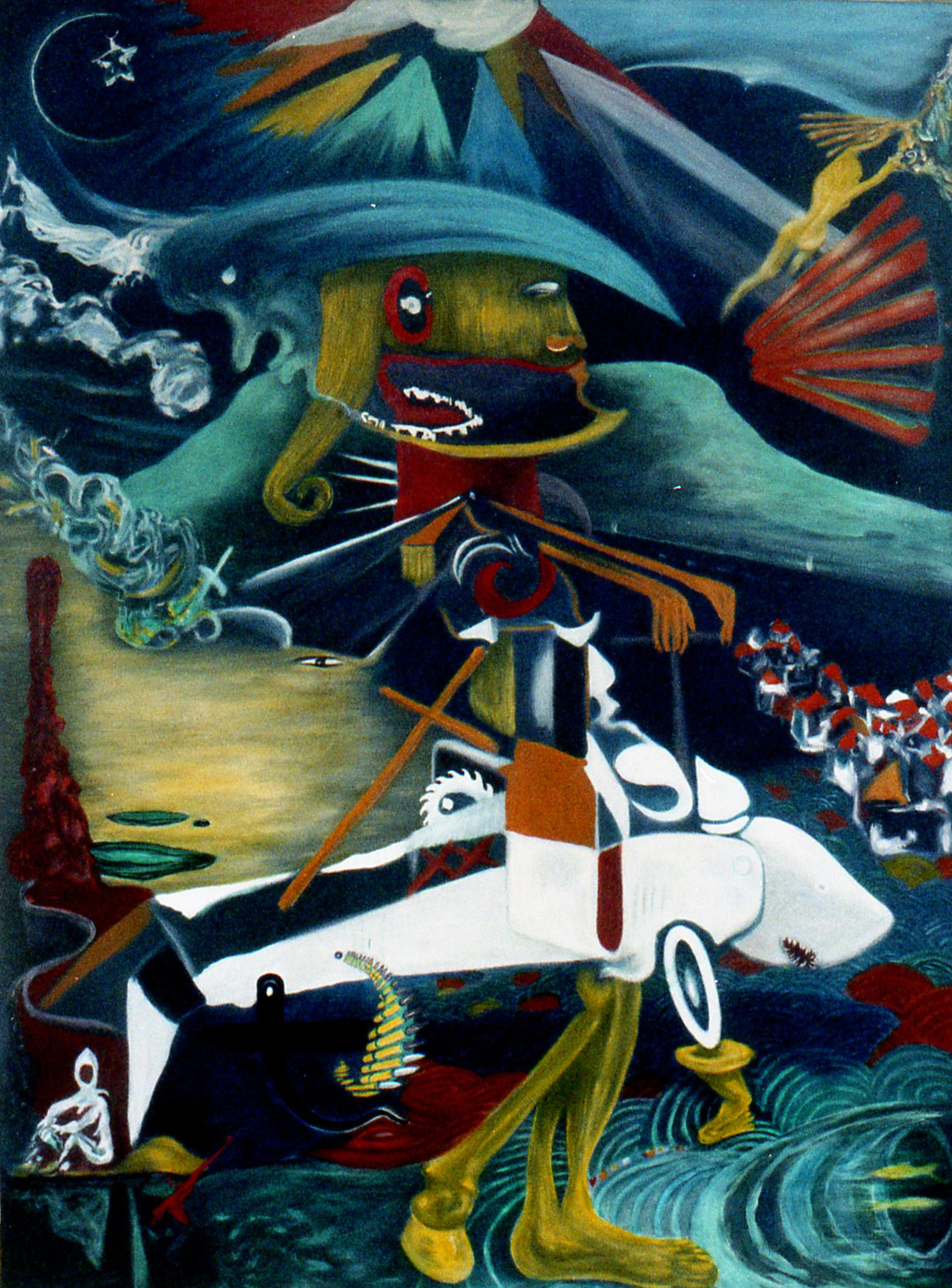 Imagine standing at a four-way stop holding one raised fore-finger into the air, being observed by the rush-hour traffic of a morning of a day’s activity taking place. Nothing to do, hungry, dejected, seeking one day’s employ for one man to lift and get. The fortunate, full, financed, for a fleeting moment are uncomfortably scrutinized by the action-seekers, the failure for whom to yet again be hired hangs as an inevitable pit of doom in the rising sun; the later the day, the less the chance. And then another white-bakkie man returns the one finger gesture except it’s his middle finger! What happened?!!

“Yeah, I know it’ a pretty hard-core sign, means Fuck You! and all that but it’s a pretty hard life and if you haven’t got a job it’s pretty much Fuck you…ain’t got no job, I’m just trying to survive myself..you know? So Fuck-off Man…!!”

So what do you make of that hey??! It’s all about getting around and to do things and survive…everythings available there, tittbits and the whole smackeroo and life is give and take. What’s your Luck?

Standing in the rain blue work-clothes drenched one finger raised to heaven choking on the fumes of bored commuters not needing help it was 6 this morning, then 7, then 8 must be past nine now the traffic’s thinning another day of nothing better go back to nowhere try get dry.

Sing to the tune of “Wakiki Man”:

With his own Family plan

and he don’t give a damn

’cause he’s just another 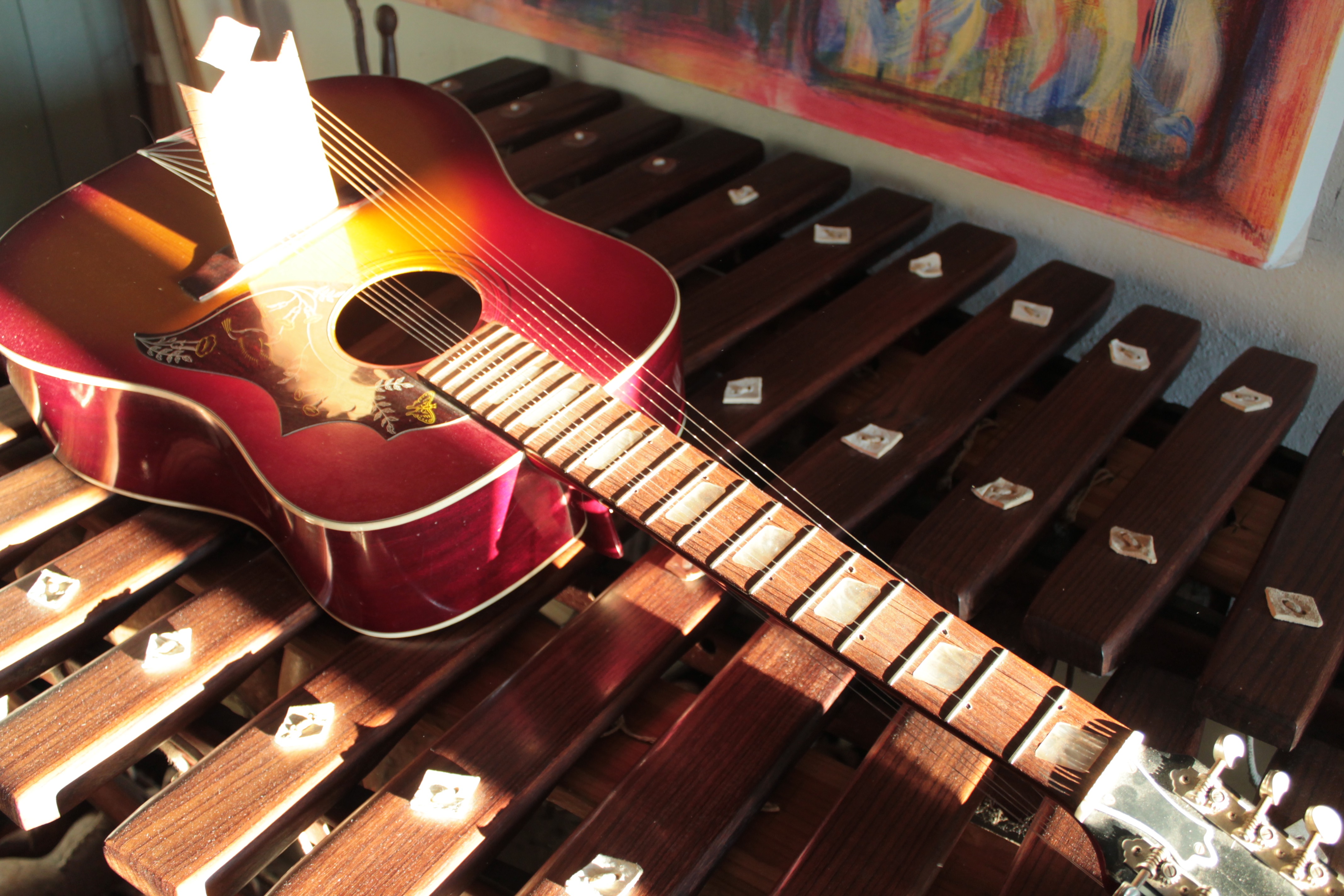 “Oh No! A Chromatic Kora!!” (in the making) Oh dear, couldn’t resist..haha! What you can do with that 12 string Jumbo Guitar forgotten in the cupboard! (Handlebars still to be put on).

The strings sit in two ranks of 6 whole tones of the chromatic scale. Notice there are no gaps in the upper rank of the chromatic marimba in the photograph because it is also in a double 6 layout (2 whole tone scales). In considering building a chromatic mbira a good option is this layout with pitches ascending in semi-tones alternating left, right, left, right etc..(as in the progression of notes of the kalimba and the kora) The double 6 chromatic layout is symmetrical and each particular chord shape in the fingers or the mallets remains the same throughout like with the ascending bar chords on the guitar.