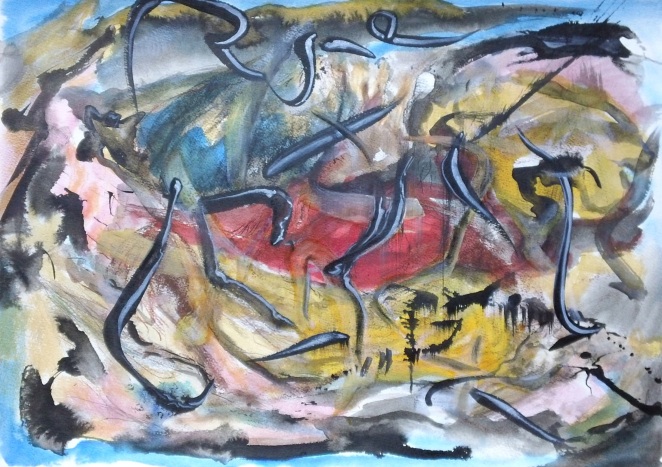 The Congregation: Motley, sparse and rowing with oars attached to the pews which have been re-arranged into the shape of a sea vessel.

Gob. A female speaker with a gentle singing voice inside a large cardboard box.

To all of you and those like yourselves playing pot-luck with your fate, your circumstances dished out to you, unaware of your creative capacity and responsibility for your life: You have failed miserably to attain to the purpose of your existence which is to be co-creator with God in yourself and your environment around you!

Surely if God is almighty and consists of everything that exists then by making a resemblance in some form or other of all that we know to be, the essence of God will then speak to us in that form and we will be able to ask It questions thereby eliminating this recent discomfort of God unknown to us. It was soon after Kleilat Bamboo (a South African from Vioolsdrift) mastered the snowflakes creation program that the computer programmers exhausted the whole world’s possible programming phenomena in all its forms. These programs were assembled together on one divine and monumental occasion and since then the people of the earth have had once again thank Gob, direct access to God. Even though God presented Itself by an unusual name: “The Wirl Hold’s Gob,” people take this as near as dammit to mean: “The Whole World’s God.” The discrepancy they attribute to those still undiscovered perpetually mutating worms and frogs in certain impenetrable tropical rainforests whose textures and habits have yet to be programmed and added. Others are convinced it’s the earth’s core lava that is moving rather peculiarly. Either way Gob was accepted over time and with some alterations managed to prove Itself. Now old Father Hillander, the last practicing preacher, living in the remote hills of Ireland presents his final service because Gob has declared the end too nigh for another.

“You had it comin’ to yer! Yer a bunch of lazy sinners…Row!! Row yer boat into the lofty skies to yer place in the Heavens to rest with Isis and Osiris, row yer way through the Milky Way, join the Kings at Orion, go as a crowd no matter how tatty ‘n skimpish yer are..! Row! Row! This is yer last Sunday to rehearse! Aye! You had it comin’ to yer… the end is Nigh… let you know to row as ye pass to the other side for fear of the vessel slipping uncontrollably into Hell. Row now this last time to be sure you take the action with you when you go sailing through the skies. Send wine to all hands on board!”

Mother in congregation: (To her children)

“Have you done your homework?”  “Not yet Mommy.”

“Well you run along home and do your homework. You don’t want to arrive idiots in Heaven!”

“What does Gob say?”

“The Gates of Heaven have moved to the Entrance of Hell”

“Change rowing direction! This is where Anti-Karma kicks in. No more neighborly niceties and being good to one another! It’s plunder, plough asunder, pilfer, pinch, all the meanness you can muster to stand you in good stead as you enter Hell!  Row…, Rooow…, Rooooow!!!”

One thought on “The Wirl Hold’s Gob!”